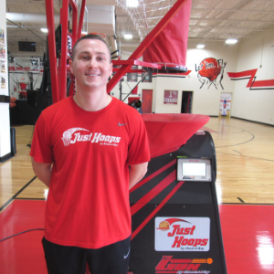 Nathan Edick, a Worthington native, has a widespread basketball background as both a player and a coach. Edick has collegiate coaching experience at the NCAA Division I, II & III levels. He was an understudy to highly successful coaching mentors throughout his coaching stops at the University of Tulsa, Virginia Commonwealth University, UVa-Wise & the United States Merchant Marine Academy. Nathan was fortunate to work for programs who competed in the NCAA Tournament, achieved a Top-10 ranking & have former players who are currently in the NBA.

Edick graduated from Otterbein University where he was the recipient of the Ohio Athletic Conference Clyde Lamb Award during his senior season. In his freshman season at Marietta College, he was #1 in the NCAA in three-point shooting after connecting on 54.8% of his three-point attempts.