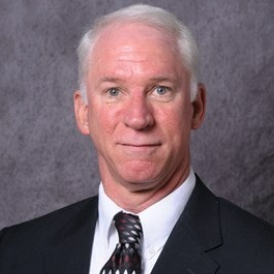 Dan Hoff, a veteran high school basketball coach who spent 27 years as head boys’ coach at Mattawan High School. As member of the Basketball Coaches’ Association of Michigan, Hoff will assist in the day-to-day operation of the Bronco basketball program, including on-campus recruiting, film breakdown, camp management, and academic progress, as well as duties regarding facilities and travel.

Hoff was the head boys’ basketball coach at Mattawan from 1986-2013, compiling a career record of 334-235 while coach of the Wildcats.  He led the boys’ basketball team to seven district championships and six conference championships in his tenure, including four while a member of the Kalamazoo Valley Association and two as a member of the Southwestern Michigan Athletic Conference.  Hoff was named the Associated Press Michigan Class B Coach of the Year in 2000, as well as the All-Class BCAM Regional Coach of the Year in 2006.  Hoff was also the BCAM Class B Regional Coach of the Year in 1997.  His tenure at Mattawan was preceded by a one-year stint as the JV girls’ basketball coach at Ogemaw Heights High School.

Hoff’s background also includes stints coaching at the collegiate and international levels; he began his career as a graduate assistant at Eastern Michigan during the 1976-77 season, and later served as an assistant men’s basketball coach at Henry Ford Community College from 1980-81.  Hoff spent four years coaching abroad as well, serving as the head men’s and women’s club basketball coach in Mackay, Queensland, Australia.

Hoff got his first taste of high school coaching at University of Detroit Jesuit High School, taking over the boys’ basketball program from 1977-79.  He would go on to spend one year as the head 7th- and 8th-grade boys’ basketball coach at St. Hugo of Bloomfield Heights before taking the job at Henry Ford.

Hoff played basketball at Eastern Michigan, serving as a team captain for the Eagles in his senior season.  A two-time Academic All-MAC selection, Hoff was named a College Sports Information Directors of America Academic All-American Second Team, and was the recipient of the 1976 NCAA Post-Graduate Scholar award.  Hoff was named All-MAC Honorable Mention in 1975, a year in which he averaged 8.2 points per game.