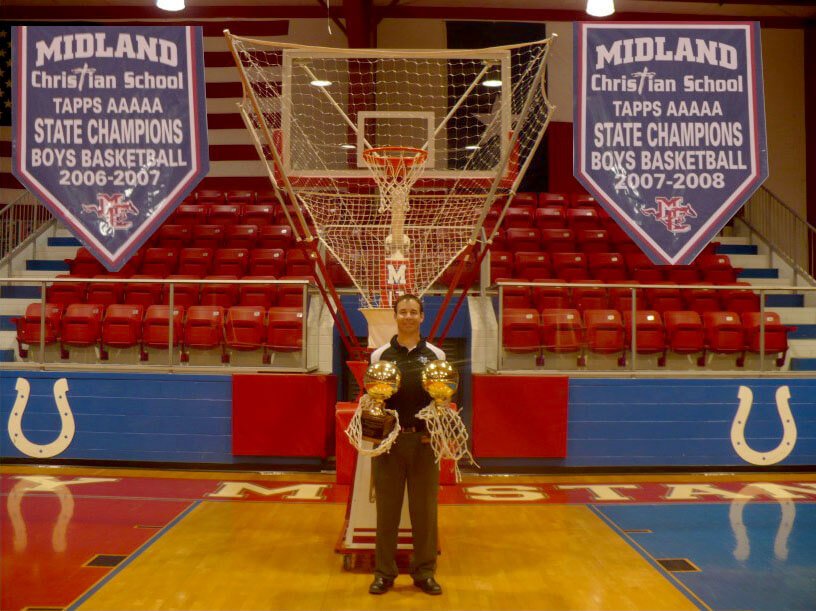 When Midland Christian High School boys’ basketball coach, Kenneth Smith, was asked what the “Gun” from Shoot-A-Way meant to his program, he simply answered, “It was a big reason we won back-to-back championships.” During the 2007 and 2008 basketball seasons, the western Texas team posted an impressive 64-6 record, which included back-to-back Texas State Championships and an opportunity for Coach Smith to coach the 2008 North All-Star team. During this time, the Mustangs improved their three point shooting percentage from 34% in 2007 to 43% in 2008. Coach Smith gives a lot of credit to the “Gun” for the impressive improvement: “Our kids love to shoot on the Gun. They see the instant feedback and instant results. We use the Gun year around, during practice, and in off-season workouts. We use it everyday!” He believes the “Gun” is a catalyst for the Mustangs hitting 286 three’s in 2008, with every starter hitting at least 40 from behind the arc and with two starters hitting over 65 from long range. With football being a big point of emphasis at Midland Christian, Coach Smith knows how important it is for his players to make an off-season commitment to improving their shooting skills. During the 2007 and 2008 off-seasons, the Mustangs’ coach saw how the “Gun” could provide his players with shooting repetition necessary to meet that commitment. In fact, the Midland Christian Mustangs and Coach Smith believe in the “Gun” so much, they just purchased their second one! Now the Mustangs have back-to-back Guns to match their back-to-back championships!!

In Consistency, Lies the Power